This itinerary along the GR 262 is a crossing between the towns of Alcaine and Oliete. The trail runs along the right bank of the Cueva Foradada reservoir.

Starting in Alcaine, from the slope of San Ramón, in the area of the swimming pools and fountain, the GR takes the track downstream through a rocky strait with outstanding angular folds of singular views and considered this environment as of geological interest in Aragón. In a short time we reach the bridge over the Martín River, next to the gauging station, bypassing the detour to the abandoned threshing floor and haystacks of Alcaine that we can see along the way from the other side of the reservoir. We will cross the bridge and continue along the track around the tamarisk forest at the tail of the reservoir, where we can enjoy the rich variety of birds that find shelter and refuge there.

Then we will leave the track and cross a ravine and still in the tamarisk, we will find some round stone structures, like rafts, used to wash and dye wool in an area of abandoned haystacks and corrals, inert witnesses of the agricultural and livestock activity of the past.

A few minutes later, along a track, we reach an area of abandoned mines known as “La Rueda”, a reflection of the mining activity that was the economic base of the Alcaine families in the middle of the last century. This activity transformed the environment near the lignite mines with old forgotten structures and dumps that together with the spectacular outcrops of shales with levels of coal and sulfur, sandstones and gypsum crystals, bright as the sunlight hits them, make up a unique desert landscape.

After overcoming this place, with hardly any vegetation and subjected to the sun, the GR leaves the track to take a path that, leaving the views of the reservoir to our left and overcoming gentle slopes until the last slope that climbs to a high point in the Sierra de los Moros, we can already see the town of Oliete at the bottom of the valley.

After a long descent combining trail and track, we will reach the rock paintings of the Frontón de la Tía Chula, where there is a viewpoint from which we can see the river, the orchard and the town of Olietá, the surroundings of Alacón and the Arcos mountain range. Next to the paintings there are some hollows that are crossed by the sun’s rays at the equinoxes. On the trail, under the paintings there is another viewpoint from where this event is observable around March 21 between 8:50 am-9:05 am and around September 23 between 9:20 am-9:45 am. A Solar Sanctuary more than 4,000 years old.

At the foot of the paintings of Tía Chula, upstream of the Martín river that irrigates the fertile orchards of Olietá, in just 15 minutes we will reach the junction of the trail with a narrow asphalt road, where a picnic area will offer us a break. Then we have two options, to go directly by this road to Oliete (10 minutes) or to go up to the Cueva Foradada reservoir dam built at the beginning of the 20th century (10 minutes).

Access to the reservoir facilities is permitted during working hours. 272 stairs anchored in the rock allow you to climb up to the top of the dam, from where you can see the dammed waters that extend as far as Alcaine. An important colony of griffon vultures nests there, having found a safe breeding place in the cliffs of the Malvín headland and the abrupt elevations of the Sanchoabarca mountain range, which encase the river and in whose strait the dam was built. It is common to observe several pairs of Egyptian vultures during the breeding season and, if we are lucky, some eagles. Waterfowl roaming the calm waters of the reservoir are common, although their observation is recommended at the tail of the reservoir, in Alcaine.

The return to Oliete (2 km) is by a narrow road that allows access by vehicle to the reservoir facilities. You can also consider the route between Oliete, the paintings of Aunt Chula and the reservoir as a hiking loop.

It is recommended to make this route from Alcaine to Oliete, in the cooler seasons or at dawn and dusk, since it is an area subjected to great sunshine, with hardly any wooded areas.

The Cube waterfall on the Radon River.

The Radón river flows into the Martín at the foot of the town of Alcaine, at the very tail end of the Cueva Foradada reservoir. It is common to see it dry most of the year, but it grows during the rainy season, originating a spectacular waterfall in a strait where both banks that channel it join hands. There is a signposted route on the outskirts of the town, which is quite technical, with clamps and tow-ropes and chains of handholds. 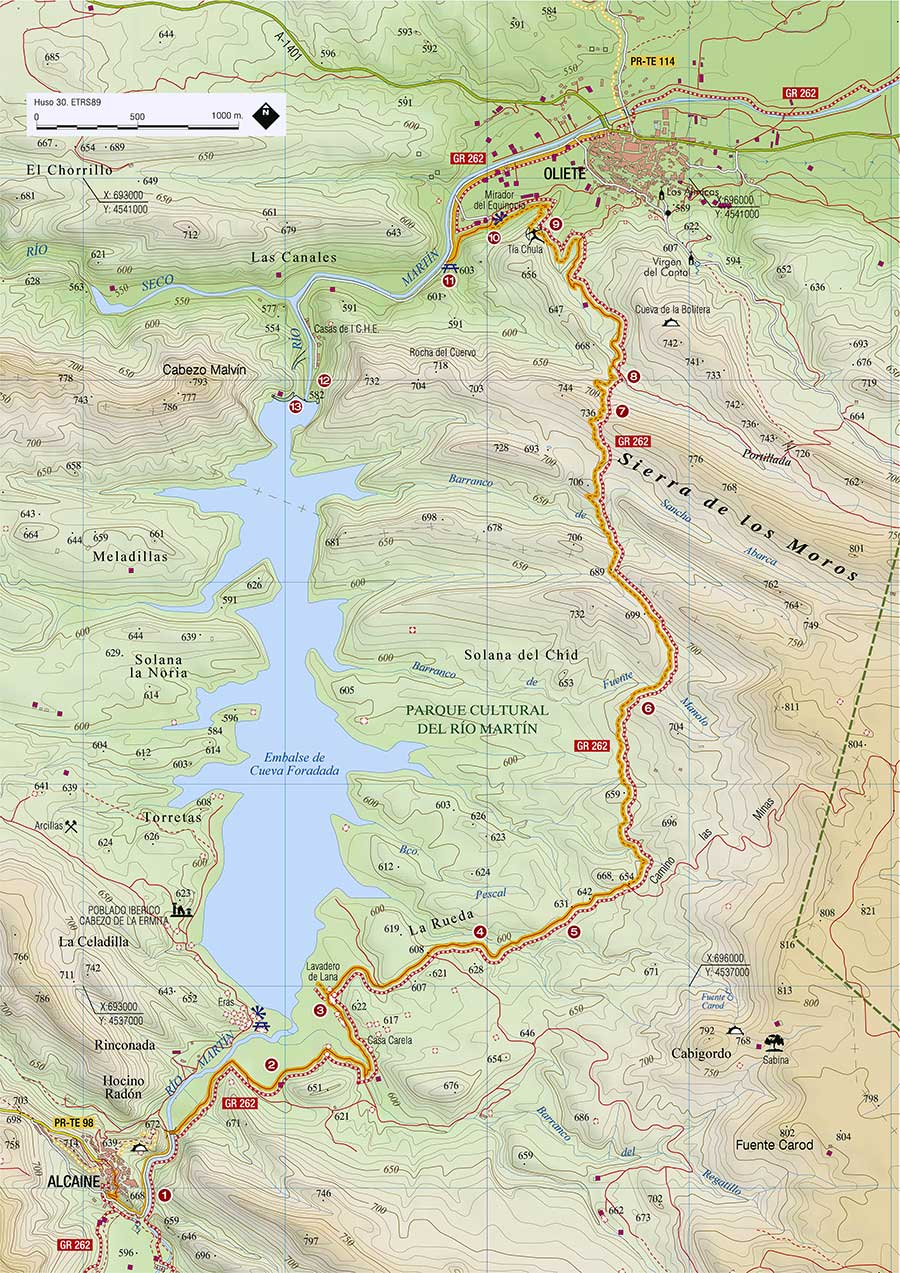